On... a few things about my books

1. I lived in an apartment share in Pimlico when I was writing the first draft of The Dating Detox. 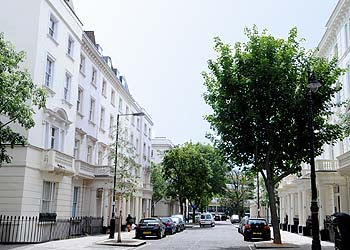 The place I lived was a bit like this, but not quite as nice. Our apartment was the top three floors, and my room was the attic, and it was a bit shabby and bare, but it had great wardrobe space and a tiny ensuite with a view over the adorable mews behind. I loved it. In case you don't know what a mews is, by the way, here's a picture. 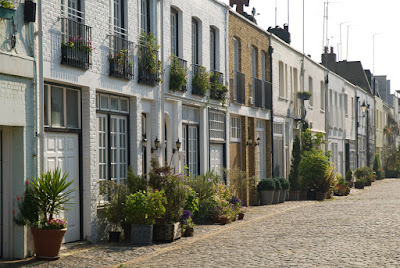 Mews buildings would have been used as stables for the horses and carriages of rich people living in nearby squares in ye olden days, so mews houses tend to be quite boxy, with low ceilings, and they are very pretty and insanely expensive. Anyway, where was I? Oh yes. The Dating Detox.

2. I wrote The Dating Detox while freelance copywriting 9am to 5pm at the advertising agencies Proximity and Iris. Freelancing in advertising isn’t the same as freelance journalism: you have to actually turn up. So I wrote before work, after work, on public transport to and from work, in cafes near work at lunch, and weekends. I wrote the entire party-in-Oxfordshire bit at lunchtimes on a sofa on the third floor of Iris, one rainy week in early summer. Weird how you remember that stuff.

3. The original title was The Dating Sabbatical. The publishers changed it.

4. Originally they didn’t go to New York, it just all happened in London. But then I thought New York would be fun and sort of a wink at the awesome ridiculousness of Sex And The City.

5. The thing in the Hogs and Heifers bar? Yep. Happened to me. Word for word.

6. I contemplated taking out the smoking, as I knew some people would disapprove, but then I thought ‘screw it, just about every woman my age in London DOES smoke at least once in a while’.Ditto drink too much. Ditto swear. I also wanted to be faithful to my original reason for writing a book at all: because every chicklit book I ever picked up seemed to star the same hopeless drippy chick who never did anything that anyone I knew would ever, ever do. Girls I know get drunk and work hard and dance on tables and make mistakes with dudes. I’m sure other girls exist, the kinds of girls you read about in some chicklit books, who just bake cupcakes and don’t have jobs they care about and spend their weekends hanging out with their grandparents or their book club (a wildly disparate group of individuals, all of whom have a secret they’re hiding, or some shit like that), but I’ve never met them.

7. I really did work with a wonderful smart talented art director called Chris for years, in my last permanent job before I was freelancing. As a freelancer I met a few lovely art directors, and a lot of lazy pigs, and thus always pined for his creative partnership the way Sass does.

8. The very first scene – the flashback to the party with Rick – was the second last thing I added. I referred to the event throughout the book and eventually my agent said ‘why not just write it so you can show how truly heartbreaking it was?’ This kind of practical, brilliant suggestion is why agents are awesome. I hadn’t wanted to start the full story with that bit because then you’d have to deal with months of heartache which would be boring. But a flashback was perfect.

9. The very last thing I added was the name. She didn’t have one because, well, I hate naming, and I felt like it was fun to keep her as a nameless heroine, but then it really wasn’t practical. So I named her Sass, after one of my best friends from university.

10. I had a lucky yellow clutch for years. YEARS. It was patent yellow from H&M for about £6.99 and I bought like 15 of them and wore one, rain or shine, until it would inevitably fall apart, then I’d chuck it and take out a fresh one. I still have two left, I sort of stowed them when I began wearing them to publishing meetings about the book and realised everyone was staring at it.

In case you don’t know, The Dating Detox was my first book. You can read the reviews
and buy it here.

10 things you never really wanted to know about A Girl Like You, either

1. I wrote-and-trashed a lot of opening scenes for A Girl Like You, till I found one that resonated: a girl crying on the floor of the shower.

2. The idea for that entire scene came because that’s what I did, for about two days straight, after I first saw the cover for The Dating Detox. Let’s be honest: everything about that cover is wrong. I get a lot of emails from people asking why the hell it has a cover like that, and there similar comments on a couple of book sites and blogs, so I think it’s time to just be honest: I didn’t have any say in it. I tried very hard to stop it, I failed. The joy and excitement I should have felt about my lovely little book being published was, to a large extent, destroyed by my genuine horror and misery about the cover. I'm sure this happens to a lot of authors. I am over it. (Ish.)

3. I wanted the first scene to be a flashforward, rather than a flashback, as I wanted to create suspense. So the reader wouldn’t know who the dude was, or why she was crying, simply that she was in trouble and – hopefully – would want to read on to find out why.

4. I wrote and edited A Girl Like You around freelancing at Iris, Saatchi & Saatchi, Karmarama and Blast Radius.

5. Originally, Plum was two characters, but one was too whingey and negative and one was too romantic and hopeful, and it was veering into chicklit-friend-cliche territory (the hard-as-nails friend! The soppy idealistic friend!). So I killed one off and made Plum a slightly more complicated character who is both lovelorn and chippy.

6. The Henry character is based on about four of my male friends, all straightforward boys-boys who always seem kind of stunned when they occasionally realise they’re hanging out with girls and in a conversation about tampons, and all of whom my mother adores. When I was single she constantly asked why I wouldn’t ever consider going steady with one of them.

7. I wanted Abigail to have a really smart, non-chicklitty-job so after a lot of thinking about the character, decided on financial analyst, and had several lengthy tutorials with my friend Tim, who worked at Goldman Sachs and was brilliantly patient with my stupid questions.

8. The speed-dating scene was one of the original ideas I had for the book, as I wanted to do a modern-day Cyrano de Bergerac slash Pygmalion story. I loved writing that scene. I also loved writing the running-away-from-a-one-night-stand chapter. Writing funny is fun.

9. I thought of the title on the tube home from Iris one day, on the Circle line around South Ken somewhere. I love the title. Luff. Lurve.

10. I love the cover, too. Sure, the cover girl is dressed like the mother of the bride, but the typography is awesome, and she has an open bottle of champagne, bare feet, knickers falling out of her purse and is clearly doing the walk of shame. Gnarly.

A Girl Like You was my second book. You can read the reviews and buy it here.
at 03:48